There’s no better way to get your heart pounding than being questioned in detail at border patrol.

Which is exactly what happened when I arrived late at night at Ben Gurion airport in Israel. Having just flown from Egypt I was prepared for this to happen, but I was still caught off guard when a stern looking woman went into unnerving detail about who I was, why I was here, and what exactly my intentions were for my trip. Thankfully, and rather unceremoniously, in the middle of one of my answers she calmly handed by passport back and wished me a good trip. And so set off three weeks in Israel.

(Sorry for the lack of photos ahead…)

Having visited Israel in 2009 with my family, I was looking forward to revisiting this country. The last time we were here, we’d spent nearly a month exploring most of the country, namely looking at the religious and historic sites. One month is a fairly generous amount of time for exploring a country that isn’t much larger than Northland. Nonetheless, I felt like there were a few spots that I’d ‘missed out’ on, and was looking forward to experiencing the country again.

The main part that I wanted to see was the coastal city of Tel Aviv. To many outsiders, the thought of Israel conjures a picture of a deeply religious, unstable and controversial country. Tel Aviv, however, is almost the antithesis of all of these things. It is, instead, a strikingly modern, liberal and largely secular city. My vague fleeting memory of the city from last time I visited didn’t match this at all, so I was keen to rediscover what I’d missed last time.

I arrived fresh from Cairo and checked in to my lovely wee hostel in Tel Aviv. The next morning I set out to see what I could see. And wow, what a different city I saw from what I remembered last time. I took the day to wander down Rothschild Ave, the leafy wide street that snakes through the middle of the city. Down the middle runs a tree sheltered boulevard with two lanes, one for walking, and one for biking. Quite necessary, it turns out, owing to the vast number of people zipping around on electric bikes. Dotted along the lanes were bakeries and cafes, as well as numerous ‘rent-a-bike’ stalls. It all felt distinctly more European than Middle Eastern.

The next couple of days I delved into Tel Aviv and its modern lifestyle, treating myself to brunch and checking out the local nightlife. To truly experience life as a local, I booked in two nights on AirBnB with a friendly local couple in their nice apartment in the north of the city.

Unfortunately, that apartment (and specifically the few meters between my bedroom, the couch and the toilet) were where I spent nearly all of of the next four days. Something had disagreed with my stomach (and I suspect it was one of my last meals in Egypt) and I wound up with a pretty terrible case of gastroenteritis. I can’t have been the easiest house guest, but luckily my hosts, Daniel and Asaf, went out of their way to make sure I was comfortable, and even drove me to the medical centre when things went downhill.

Fortunately my stomach held itself together enough for me to get out a couple of times. Unbeknownst to me before I booked my trip, I’d arrived in Tel Aviv during the biggest holiday of the year – Independence Day. Israel is interesting in that it celebrates both their Memorial Day (equivalent of ANZAC day) and Independence Day over two consecutive days. The first day, Memorial Day, is a national holiday, and during the day various sirens sound across the city and everyone is required to stand in silence, regardless of where they are or what they’re doing, in respect for fallen soldiers. In the evening I went along to the national ceremony in the centre of Tel Aviv (and quietly panicked, realising this was exactly the kind of ‘large controversial gathering’ that the NZ Government travel advice had told me to avoid). Despite not understanding most of the ceremony (aside from a bit of explanation from my hosts), it was nonetheless an interesting moment to be a spectator of, and attempt to understand more of social and political underpinnings of Israel. Apparently Memorial Day is particularly poignant to most Israelis, as nearly all of the population have passed through mandatory military training.

The following day saw one of the most immediate and strange transitions I’ve ever seen. At exactly 8pm, Memorial Day changes into Independence Day, and the entire city switches into party mode. And not just your average party. The entire city erupts onto the streets and has the biggest street party you’ve ever seen. Teenagers are running around with blue and white silly string and white foam, spraying it on every surface. Every apartment is blaring music, every bar has crowds spilling on to the street and everyone is in a good mood. Despite my troublesome guts I tagged along to an Independence Day party and danced the night away with a bunch of people I’d just met.

The next day, feeling worse for wear but also sick of feeling sorry for myself, I boarded train to Jerusalem. If Tel Aviv is the party capital of Israel, then Jerusalem is the religious capital (while also being the contested and internationally unrecognised political capital). The local saying is that while Tel Aviv plays, Jerusalem prays.

Most of my first day I was still relegated to my hostel bed. But over the next few days I managed to get out and explore some of the sights. Most notable in Jerusalem are all the sights of the old city – a large chunk of Jerusalem surrounded by 2000 year old walls, and filled with narrow winding alleyways. This small chunk of the world is the centre of three of the worlds major religions – Judaism, Christianity and Islam. While we explored it fairly extensively last time I was here, it was still cool to go back and see some of the highlights, like the Dome of the Rock (the site of the last temple in Christianity, and now a large and important mosque in Islam) and the Western Wall. The Western Wall is a remnant of the great walls that once surrounded the temple (important to Judaism and Christianity) and is now a holy site where Jews pray in their masses. 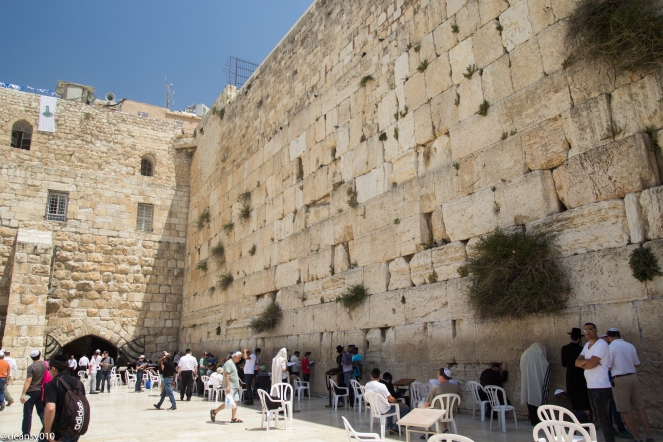 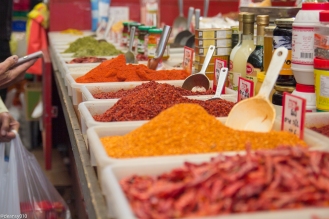 Western Wall and Dome of the Rock 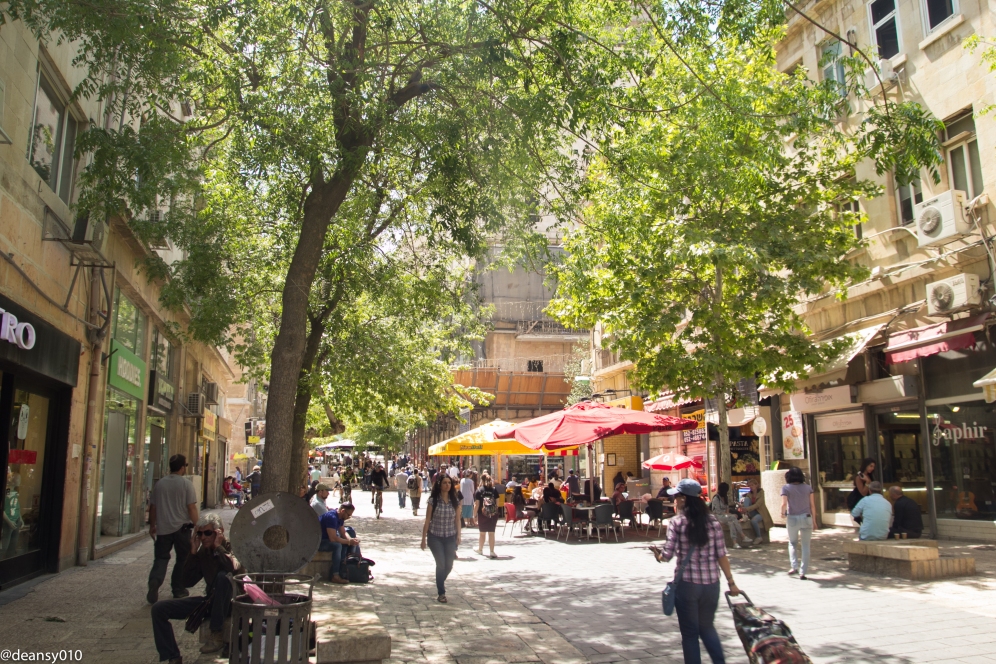 Harrowing but inspiring, also, was the Holocaust Museum (aka Yad Vashem). Built atop Mount Herzl, the building takes you through a fairly heavy and emotional journey before arriving at a stunning and more hopeful view across the valleys of Jerusalem.

Having finally recovered from gastro and satisfied with my stay in Jerusalem, I set out to explore a part of the country I hadn’t really seen much of last time, the Dead Sea and Ein Gedi Nature Reserve. I was lucky enough to be staying with a local on the Ein Gedi kibbutz – a beautiful oasis in the middle of the desert, renown for its botanic gardens. While nearly all of the kibbutz in Israel have abandoned their original strict communal lifestyles, many are still operating with some aspects of communal life still intact. I’d arrived on Friday night and joined in the Shabbat dinner in the shared dining hall with the rest of the community, which was a cool experience.

That night my local host Dror took myself and one of his friends on a pretty amazing adventure. Dotted around the coastline of the Dead Sea are various hot springs, but are largely inaccessible unless you know exactly where to find them. Dror led us down a crumbly bank path off the side of the road to a large hot pool feeding straight into the salty waters of the Dead Sea. For a few blissful hours we floated in the pool (and in the Dead Sea when we got too hot) under the moonlight in the middle of the desert. I still can’t get over the weird sensation of floating on the Dead Sea – it’s like you have no weight at all. You can float in pretty much any position you can think of, and you still won’t sink. Overall a fairly unforgettable night.

The next day Dror and I set off into the Ein Gedi Nature Reserve, a beautiful little oasis in the desert. It’s uncanny seeing the impact that water can have on a landscape. Nearly all of the Dead Sea desert is totally dry, dusty and barren – not a spot of green anywhere. But where water flows, even the tiniest trickle, plants seemingly erupt out of nowhere. We trekked for a few hours alongside a small stream, before reaching a beautiful waterfall and luscious blue pools that were begging to be swum in. Naturally, we obliged. It was refreshing relief after walking through the rapidly rising heat of the desert.

Having had enough of the desert heat, I headed back to Tel Aviv to spend the rest of my time in Israel relaxing in the city. Most of the week passed  uneventfully, shuffling between my hostel, the beach and various cafes around the city (much to the detriment of my bank account). For a few hours one day I made my way to the city of Haifa to explore the Bahai Gardens – a massive, sprawling and beautifully symmetrical garden that extends all the way up the side of a hill. Unfortunately I’d arrived too late and most of it was closed, but the view from the top was still fairly staggering.

At the end of the week, I made my way back to the airport, this time steeling myself for another questioning. To my relief, a much more pleasant Israeli guy asked a fairly standard round of questions, and I passed uneventfully through the airport and boarded my plane to the next destination – Turkey.

View all posts by danieldeans