I’ve often felt that kiwis don’t get out often enough to explore their own country. Millions of tourists from around the world flock to our shores every year, yet many kiwis have never even been to the opposite island from the one they live on (let alone Stewart Island!). So, in November, a friend and I set out to rectify that problem for ourselves.

Having grown up in the South Island, I’ve been lucky enough to explore a decent chunk of this magnificent area already. However, both my friend and I had a list of various spots and hidden gems that we wanted to discover or re-visit. Armed with a tent, a vague agenda and a yearning to explore, we set out on a two week adventure in November 2016.

First on my agenda was the Catlins, a beautiful and rugged area at the south-east corner of the South Island. The whole area is sparsely populated, and dominated by rolling green farmland, dense native bush, imposing coastal cliffs and vast empty beaches. We spent our first two nights staying at the gorgeous and remote Purakaunui Campsite.

Our days we spent exploring the areas natural beauty, as well as an amusing morning at The Lost Gypsy Gallery in Papatowai, a hilarious house of curiosities created by local man Blair Somerville. The gallery is full of crazy mechanical contraptions built from abandoned materials, and most of them seem to come from the wildest parts of your imagination. I highly recommend paying the extra $5 to have a good look inside.

Winding across the backcountry roads of the Catlins with a loose agenda, we took the chance to explore the various DOC short walks and nature spots dotted along the road. Highlights included various small waterfalls, vast vistas over native bush and sandy beaches, and the vast Cathedral Cave. At the far end of the Catlins you’ll also find Slope Point, the southernmost point of the South Island. 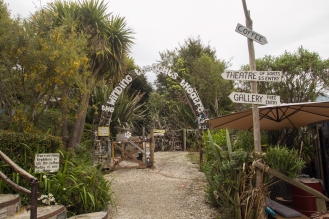 Once we’d had our fill of the Catlins, we made our way further south yet again – right off the South Island, in fact. A leisurely hour long ferry took us across Foveaux Strait to Stewart Island – New Zealand’s oft-forgotten third island. Home to a sleepy small settlement and a vast expanse of native bush, Stewart Island is the nature-lovers ideal island getaway. Despite being so far south, the climate is surprisingly mild (if not a little wet) and the coast is dotted with goregeous empty golden sandy beaches. Tūī and kākā screech around the township, and the bird sanctuary of Ulva Island (just off-shore from Oban) holds even more rare native birds if you’ve got a keen eye for birds.

We spend two lovely nights at the homely wee Bunkers Backpackers, before setting off on our main mission – the Rakiura Track. One of New Zealand’s nine Great Walks, this three day journey around part of the island would be Great Walk number seven for me, and high on my bucket list. Given the total distance of the walk is only 30km, we decided to tackle it in two days instead, spending one night at North Arm Hut.

Day one was our short day, taking only three hours from what is usually the end of the track to North Arm Hut. This was a nice, short introduction to the track as we wandered through the native bush and caught occasional glimpses of the coastline. We were rewarded at the end of the day with a gorgeous sunset over the bay at North Arm Hut.

The magic really happened on day two, however. We set out early(ish), meandering through the dewey forest as early morning sunlight filtered through the trees. After a steady few hours walking we emerged on to the glorious Māori beach, a sweeping golden sandy expanse that is a real treat for the eyes. A perfect place to stop for lunch!

Once we’d had the chance to recuperate, we set out on the home stretch. Fortunately, by doing the track in reverse, we’d saved the best part for last (and chanced on the best weather, too). The last few kilometres sidled along a steep forested bank, with occasional outlooks across crystal blue water and even more isolated sandy beaches. Who knew Stewart Island could be such an island paradise?! The track finally came to an end at the iconic chainlink gateway, which ‘links’ Stewart Island to the South Island. 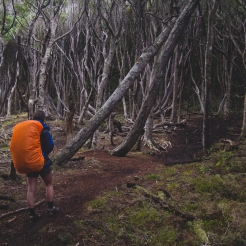 Saying a sad farewell to Stewart Island (and a commitment to come back in the near future) we drove onwards to Queenstown, play town of the South. We’ve both spent quite a bit of time in Queenstown over the past few years, so this was a brief stop to soak in the sights once more and catch up with friends.

Setting out slightly later than planned the next morning, we made our way to the equally beautiful Wanaka, before venturing up into Mt Aspiring National Park, where we’d spend our night. We began our walk at the Rob Roy Glacier carpark and began our walk into the Matukituki Valley, heading for Aspiring Hut. The Matukituki Valley is a glorious, grand, glacier carved wonder, with verdant green fields and bush framed by imposing granite mountains on either side. Aspiring Hut sits two hours up a gentle walk up the valley floor, and in good weather has a stunning view of Mt Aspiring itself. 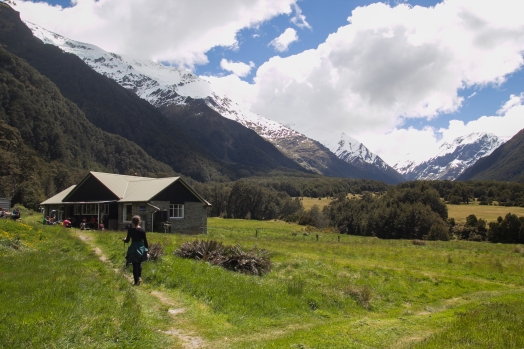 Not satisfied with only a valley floor view though, the next morning we set out to climb higher. We took the recommendations of the hut warden and began clambering up the Cascade Saddle route, a steep and rutted track going straight up the side of the valley. After a couple of hours of trudging and sweating, we emerged above the bush line to behold a breathtaking view up and down the valley. This, by far, sticks out as the highlight of my trip. We were even lucky enough to glimpse the jagged peak of Mt Aspiring as the clouds raced past it. 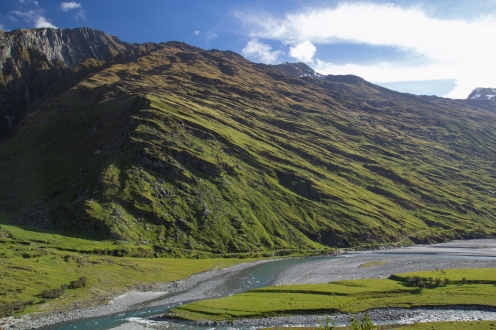 Satisfied, we made quick work of the descent and headed back down the valley. On the way back to the car, we took a side venture to view the Rob Roy Glacier. A comparatively easy track, it wanders up through beautiful beech forest to an imposing cliff face and glacier. A thoroughly worthwhile trip, though by this stage most of our energy had dissipated, and thoughts of food and a soft bed were much higher on my priority list.

Setting off from Wanaka the following day, we ventured through the winding roads of Haast Pass. While stunning and beautiful, it was also overwhelmingly wet. Driving, torrential rain. Arriving on the West Coast brought no respite, and the inclement weather scuppered our best laid plans to tackle the Welcome Flats Hut track. Indeed, it scuppered all of our plans from there out. We made for Fox Glacier town, briefly explored the glaciers and retreated into a cozy warm backpackers to re-evaluate our plans.

We woke the next day and pushed on to Hokitika, where it became even more apparent that the weather was not likely to change its course for days to come. The decision was reluctantly made to return home to Timaru, where much more fair weather awaited.

Despite coming to a premature end, the entire trip was inspiring and invigorating. Rather than satiating my desires to see the bits of the South Island that I thought I’d missed, it only reawakened my desire to see more of it. I can’t wait for the next trip!

View all posts by danieldeans